We arrive around four and decide to camp up on the rim. It is not so cold and we rejoice as we comfortably cook and drink some cognac. As we are cooking Stefan grabs me and exclaims, “Madre mia! Look at that, I can’t believe we almost missed it!” At first I thought he saw a huge shooting star, then I got a little spooked as he continued to look and imagined some strange creature lurking behind my tent, but as I stood up, I saw that he had just glimpsed the massive moon as it cleared the horizon, as orange as a pumpkin. It looked just like a jack-o-lantern and the significance of our proximity to Halloween was not lost on me. Of course it was atmospheric dust that lent the moon its color, but I have never seen the moon garbed so, a faded imitation of the sun itself! At length we went to bed, enjoying the relative warmth. I slept soundly and woke up feeling very refreshed after two comfortable nights of sleep. We climbed down into the canyon, taking an unofficial route, and hung out at the bottom, chatting to some fellow tourists I heard speaking English. They were quite excited by the roguish nature of my travel and asked me lots of questions, which was refreshing! I forget that this is an unusual and adventurous endeavor sometimes, especially when you hang out with a bunch of other cyclists for a while. I am still unable to deftly defer such enthusiasm, but glad to be reminded that this is an interesting experience and I need to appreciate it! Eight months is a fair bit of cycling though. As I said, ready for a break. (They themselves are teaching at an international school in Almaty, which is interesting in itself.) We filtered some water with Stefan’s filter and hiked back up the canyon. 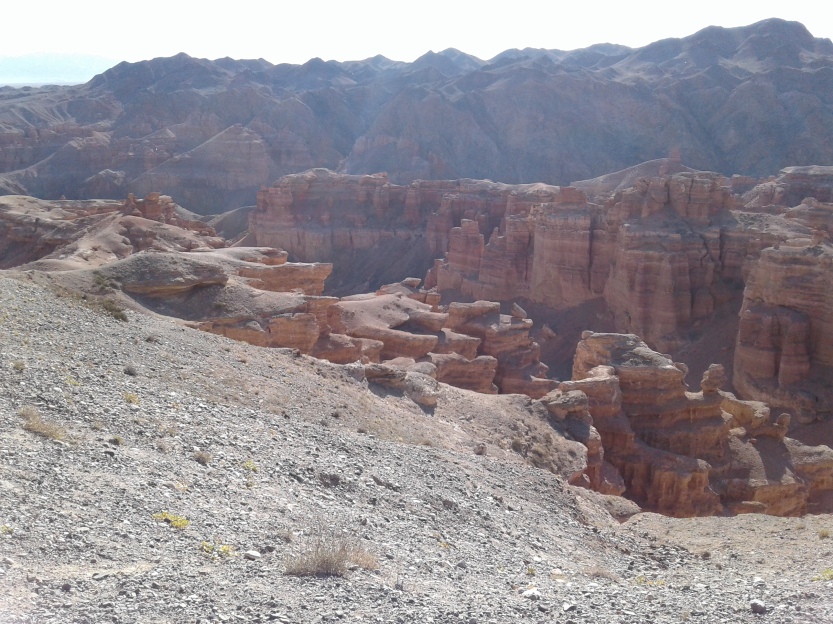 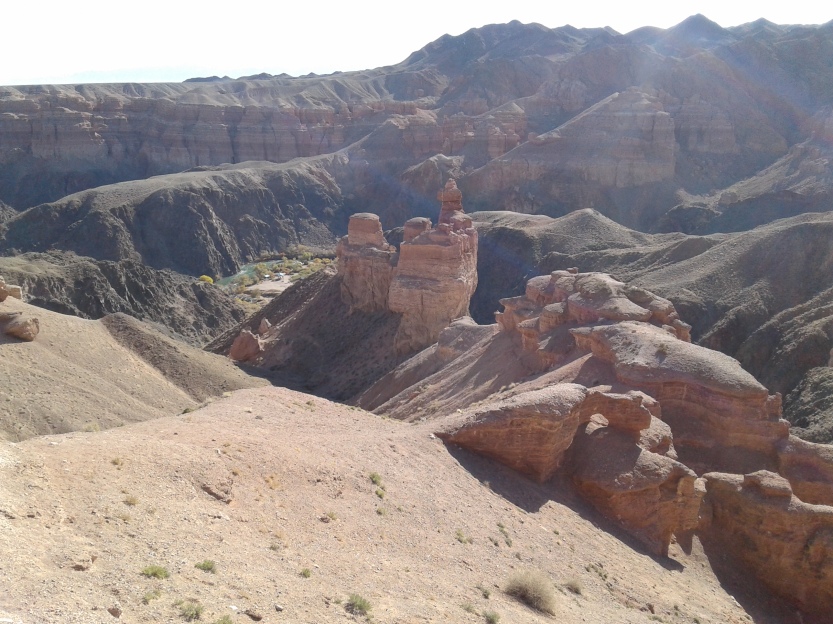 This is where we began the process of bidding each other farewell. Since I met Stefan almost two months ago we’ve spent everyday together, all 24 hours. We camped together, cooked together, bought groceries together. Even within the Pamir Pack, we were grouped off: Stefan and I, who met two days outside of Dushanbe, Youri and Didi, who met on the ferry, and Joan, Jordi and Aleix, the first two are brothers who met Aleix in Iran. People split off, naturally, but Stefan and I were a duo, and also the last two of the Pamir pack, which made the split extra sharp: Aleix I rode with almost as long as Stefan, but the goodbye was not so hard, partially because he left so early in the morning, partially because we still had a crew. After a peaceful hike through the canyon we had a snack and set off to the split. 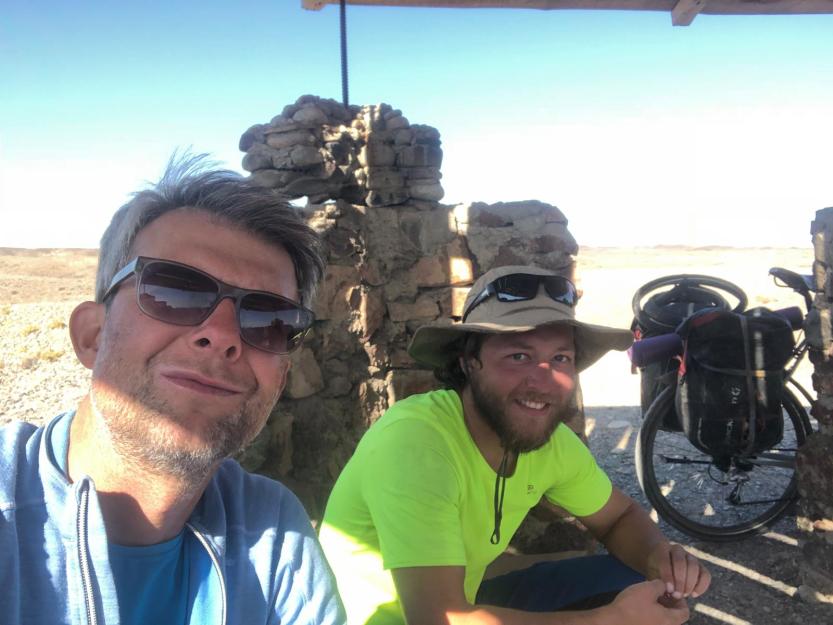 We took some pictures exchanged a hug, and as we made our farewells, I started to lose it a bit. I hate goodbyes, and we quickly parted ways, I for my part retreated before I started crying, which I did, I cried like a child as I rode away from Stefan. He is such a good soul, really an inspiring person with a calm, affable way. It is rare in this world to meet such an easy-going, positive fellow, without a scrap of ill-will in him. I am by comparison quite a curmudgeon, prey to dark moods and bouts of silent brooding from time to time. Stefan is blessed with such a demeanor, which surely is also the result of diligence and hard work, and those around him benefit by his influence. He was always patient and generous to me and we really meshed well.

As I rode over the bumpy dirt road, crying freely, I was trying to laugh and smile at the same time. It was a joyful cry, an overwhelming feeling of gratitude and fond recollection of our time together. I sincerely hope I have the same feeling when death drapes itself upon me one day. So yeah, I cried, okay? I’m a man. Real men cry. I feel like crying again just thinking about it.

6 thoughts on “End of the Pack”

This is a text widget. The Text Widget allows you to add text or HTML to your sidebar. You can use a text widget to display text, links, images, HTML, or a combination of these. Edit them in the Widget section of the Customizer.